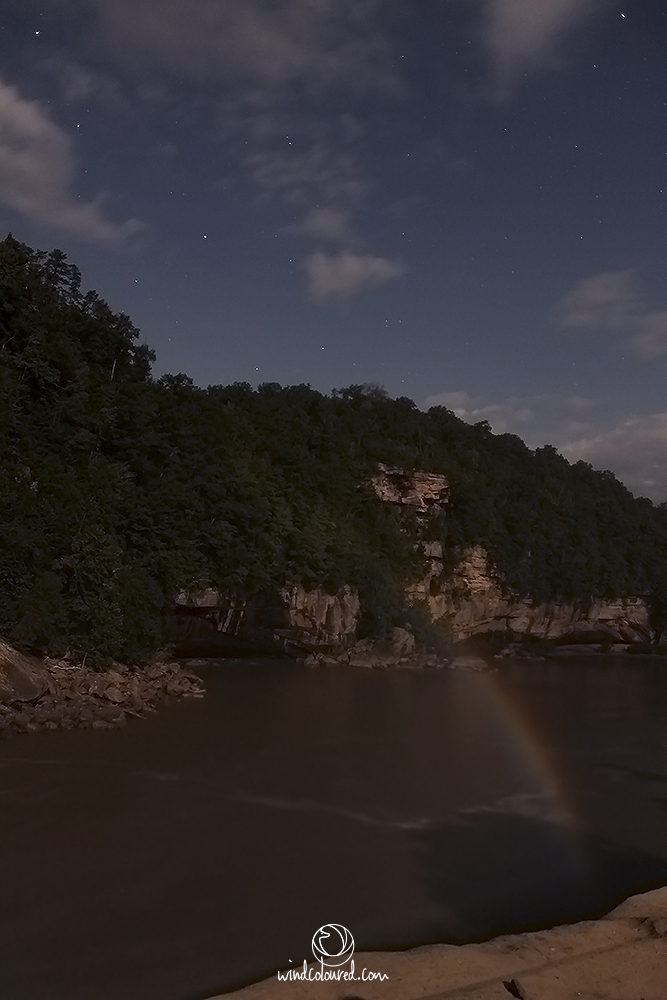 Why moonbows? And how?

So let’s just sum it up with light and water, these are the two important ingredients. And we also need just those two for our moonbows. However, as the name already suggests, moonbows are not created by the direct light of the sun but the moon (which comes from the sun, too, I know…) Consequently you can only see them by night. A fascinating thought, isn’t it?

As you can imagine, the chances of seeing a real moonbow are rather bad. There needs to be full moon in the right place by the right time. It needs to rain but still be cloudless enough for the moon to be seen. And then you need to be in the same place as all of those things. Of course you can get lucky but for all those who do not want to wait: There is hope. I a couple of places on this planet moonbows occur rather frequently in the spray of waterfalls.

The moonbows at Cumberlandfalls in Kentucky

From our sister city in Belleville, Illinois we took off for a roadtrip to the Cumberland Falls in Kentucky.

Every month the full moon will be in the right place for about three nights to create the beautiful moonbows in the spray of Cumberland Falls. Only the clouds could get in your way but hey, you have three nights in a row each month, right? We only have a vague plan of our road trip to stay flexible and regularly check the weather forecast on the way.

The forecast is good for the first of the three nights so we decide to give it a go. There is a couple of possibilities when it comes to spending the night in the state park. We have a tent with us and from the campsite only 2 kilometers away from the falls it is only a five minute drive. Of course you can also walk but then you will have to make your way back through the dark forest. Also the moonbows would be no real American attraction if you could not park right next to the location. The road takes you directly to the falls and you only have to do about 100 metres on foot until you reach the plateau from which you can see the waterfall.

The more easy it is to get there, the more crowded it is, right? When I find a free spot by the fence and set up my tripod a mother points out that the spot is already taken. When I answer that I don’t see anyone she calls her daughter to get in front of me. Wow, I thought the Germans were famous for this kind of behavior… Anyway, I find myself a new spot. It is not THAT crowded. The spectacle has not yet begun and so we wait for the moon to rise.

As the moon rises above the trees, we expectantly watch the falls. And there in the spray, the spectacle begins. The moonbow is small in the beginning but grows with the movement of the moon until we can almost see the whole bow. Many of the visitors have left the scene by this time, something I have experienced quite often in the US. With  my “stay and enjoy mentality” I often have to fight for my time within this culture. However, tonight no one hustles me.

At this point I have to say that the moonbows did not sweep me off my feet the same way the polar lights or the bio bay did, just to give examples. However, it is a beautiful thing to watch. And it is even more beautiful to stand there and realize that the light from the sun that takes such a huge detour over the moon, still has the power to create a moonbow that we can admire under the stars.

If you are close to the Cumberland Falls around the full moon, go for it.

And by the way… for those who do not trust the nocturnal luck: The Cumberland falls also show a beautiful rainbow by daylight. Two is better than one, right? 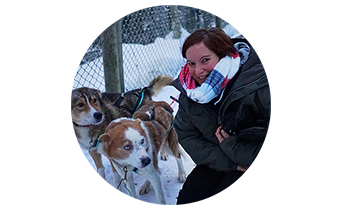